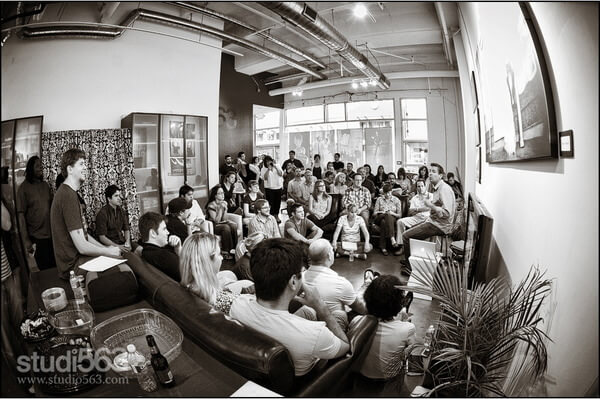 Hey, photographers! Keep reading to the end, because this post involves YOU!

It is hard to believe it was just a week ago that I headed out to Austin for the Fast Track Photographer Roadshow Workshop. It seems like so long ago! But last Wednesday the workshop kicked off with an amazing PUG event put on by Suzi Q and hosted at Studio 563. That place is *amazing!* What a gorgeous studio Andy, Eric & the team have put together. It was also super cool to see Scott from San Antonio who attended the Houston workshop, and Ben, Caroline, Matt, Francis and Errol who were in New Orleans with me just a few weeks ago. I got to meet Nana and Voto too! What a fabulous time!

The above photo was taken by Chip of Studio 563 who drove in with Craig from Houston. There is a lot of others on his blog; I haven’t downloaded my photos yet. Eep! I was too busy hanging out with everyone at the workshop and being in the *now*.

I had warned Andy when I first talked with him about using the space that we had had nearly 50 people at the Houston “Standing Out in the Crowd” presentation, so it was probably going to be packed – but I think he was a little surprised to see 60-75 people there packed into the studio!

The workshop was nothing short of amazing. Having been an attendee myself just a few months ago, it was interesting viewing everything that was happening from a different angle. People were asking me about what was coming up, and I refused to tell them – I wanted them to experience the magic of it all. I know that all sounds so hokey in writing, but there is no other words for it.

Photo by Danielle’s mom, taken with Dane Sanders’s iPhone and processed using the Shake-It app. GoGoGumby joined us for the shot.

At the end of the workshop, we talked about where we were going from there, and I shared with everyone that I plan to continue the First Thursday Photographer Meetups (FTP Meetups – just like Fast Track Photographer!) — and some of them even joined in considering doing something similar in their area! I’m so excited. Really though – ANYONE can do this. Come on out and join us! It is incredible what we – individual photographers – can achieve when we band together and support one another!

I need you guys to help me out though. I can’t do this alone. I need you! If you’re in Houston, I want you to come out and be a part of what we’re starting here. And if you’re not in Houston – that is ok! Start something up in your area. Don’t try to work in a vacuum.

So now for the BIG NEWS!!! The next Houston First Thursday Photographer Meetup is at my studio, 1024 Studewood, in the Heights tomorrow night. (September 2, 2009) Doors open at 6:30 for meet & mingle time, and we’ll be meeting from 7-9pm. Or later. I’ve never been one to kick people out, but I understand if people need to leave at 9. It is opening to anyone in the photography business, or aspiring to get into the photography business. We plan to discuss pricing, and it is a round-table style discussion where everyone can join in!

And to answer the question I’ve received a few times – as much as I would *love* to see you over on the Fast Track Forums, or see you take the workshop, or even read the book … you don’t have to do any of these things to attend. No membership in anything is required. You just need to be a photographer and be open to supporting others in the community.

Leave a comment if you plan to join us and you haven’t already told me some other way – I want to make sure we have enough seats!

While I’m talking about big news … did you know that the Tofurious SEO Workshop tour has just opened up its other dates? The OC Workshop sold out crazy fast – get in on this while you can! He’ll be in Houston in October!

I’ll try to make it. No hard-line promise, but hopefully so.

I will be there!

You know I am coming, but I am telling you anyway 🙂

Yay!!! I’m so excited you guys are coming tomorrow night!

It was so nice to see you and everyone else at the PUG meeting in Austin! Thanks for introducing me to the Shoot Q team. They ROCK, and so do you!

I would love to meet and mingle with other Photographers! I will try and make it.

Thx u for hosting this event. The discussion regarding pricing was very interesting. I enjoyed it, looking forward to the next on.

Your images are so beautiful! You are very talented and it was a pleasure going through your work!

Darn it, I totally missed this lol. Would have loved to have attended! I’m in other photography meetups, and I live only a few minutes from your studio. Well, hopefully next time then!

I’m a make-up artist looking to network with others in the industry. When is the next Fast Track Meetup?