It is interesting now to look back on October 2015. Those last days before my life would change in ways I could not even imagine.

Attending the Emerging Women Conference in San Francisco, I was on a crazy whirlwind trip. I had already been to Calgary, a day in Edmonton, a trip over to Kelowna, back to Calgary, and now San Francisco. I had a return trip to Houston, then Toronto, Northern Ontario, and New York City still ahead of me.

As we sat in a circle on the first day of the conference and introduced ourselves, we were asked to state where we would be in one year.

I had no idea that my heart was basically a ticking time-bomb at that moment.

I should have. All the signs were there. Earlier that day, my friend Audrey & I went to the Ferry Building. She suggested we walk down there as the weather was gorgeous. I suggested that an Uber was a good plan because I knew I needed to save my energy. A simple walk was too exhausting for me. On all of my flights, I had started asking for wheelchair assistance. If the walk to the gate was too long, I would be winded and have bad “heartburn” (it was really angina) by the time I got to plane.

I was determined though that someday, Oprah needed to know who I am. I spoke that as my intention.

I had a follow-up visit with my cardiologist after all that travel. I told her about the wheelchair assistance at the airports. She stopped what she was doing and asked me to repeat it again. It was a Tuesday, the 3rd. She told me she wanted me to be in the heart cath lab by Friday, the 6th.

She doesn’t do the heart cath procedures; I met the cardiologist that would be taking care of me moments before we went in. He assured me that it was no big deal, we would be done in 45 minutes or so.

We were in there for nearly 3 hours.

I had a 100% blockage in the LAD, known as “The Widowmaker”. I had multiple other blockages. He put in 4 stents that day.

We had to return 6 months later as my condition deteriorated, only to discover I had a new 96% blockage and a 93% blockage, also in the LAD. He added 4 more stents.

Heart Disease and the Ongoing Battle

The past two years have been a rollercoaster.

Cardiac Rehab to try to help rebuild stamina and improve the condition of my heart, while attached to machines so that it could be monitored while I exercised.

The worst part for me was the constant medication changes until we finally found the right combination.

Some of the medications caused a lot of what I’d describe as “brain fog” – there are entire months that I simply don’t remember. I taught an entire class online that I don’t recall at all. I know I taught it, the videos exist. I don’t remember it though.

Thankfully, we have fixed that now. That brain fog has cleared for the most part. My medications are stable, and have been for months.

The unexpected part was the mental impact. No one wants to be told in their 40s that they have to take medication every day simply to stay alive.

No one tells you the impact that a chronic illness like heart disease can have on your well-being. The depression that it can bring on. (The chemical soup of all the medications was no help, I’m sure. We were changing things every 2-4 weeks at one point!)

The Passage of Time

Here we are, two years later. It has now been 18 months since they put in my last stents. My blood pressure has been level for months, my medications remain unchanged.

I finally feel like I have my life back, or at least my life in this new normal place that it is at now.

Recently, this has left me reflecting on what I said at that Emerging Women Conference in 2015.

I made a discovery recently. I no longer care if Oprah has any idea who I am.

Oh, I’m not giving up what I’m doing. I still want more than anything to help people embrace the message of “You Are Enough”. To stop believing the lies of our Perfection Culture. To define what success looks like for themselves.

Somewhere in there though, there has been a shift. Where I once thought that I wanted to focus on a broader audience of people to work with? That has changed.

While I can’t carry a camera around right now, not like I used to, and a full wedding day is not something I’m up for photographing, my heart? My heart is still with photographers.

My passion is here, helping photographers build their businesses online. Using their story to connect with their clients. Threading the best part of themselves through their brand.

Being The Life Boss that they long to be, finding the strategies that work for them to allow them to have a business that supports the LIFE of their dreams.

That’s what it is all about, isn’t it? We only have this ONE LIFE.

No one says at the end of it that they wish that they had made more money, or booked more clients. We do all wish though that we had more photographs of the memories, that we had touched more hearts, that we had helped more people.

That is what I want. If I can’t be the one taking the photographs? I want to be the one helping those that are taking them. We have so many stories to share, and those stories matter more than anything.

Oprah? She doesn’t matter these days. With that, it is time for me to tell her goodbye.

My life has a line drawn across it. Before my heart disease diagnosis and afterwards. One day, two years ago, everything changed.

It has taken me two years to understand how, and then to embrace it.

To accept that I need to focus on grace, not guilt.

My life is different now, in every way. I am learning to work with the rhythm. That some days are high energy days, and other days are not. I can plan for them, and I can work around them.

For so long, I clung to that Oprah dream, and I berated myself because I was not moving forward towards it. Then one day a few weeks ago, I stopped. Why was I chasing that? When I stopped and considered it, I realized it really didn’t matter anymore.

That was the day I started making NEW plans.

Good-bye, Oprah. You’re welcome to call me anytime, but I’m not chasing you anymore. 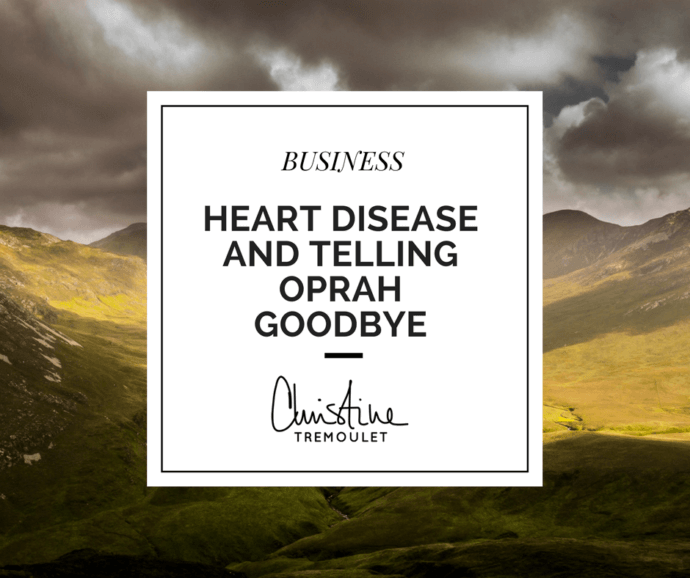 Holy shit woman!!! Do you know WHY I needed the netflix day today? Almost EXACTLY THIS!!! Btw… you DEFINITELY ARE enough.

Beautiful post and what a strong person you are! The photography community is definitely happy to have you and your guidance.

Thank you so much, Brookh & Kimberly! I can’t tell you how much your kind words mean to me! XOXOXO

[…] I realized at the end of 2017 that it was time to Oprah goodbye, and embrace that I want to focus on working with professional photographers. […]