When I first saw this photo of this man dancing, my heart hurt. Here he was, happily dancing to the beat – until he noticed someone taking his photo, and he stopped. His body language in the second photo? It just crushes me.

Some days, the power of the technology we hold in our hands has such a negative effect.

Fortunately, the story does not end there. After he was body-shamed, and the image was posted on Imgur by FrozenBadger telling off the people who did it on 4Chan? A group of body-positive women in California swooped in with a plan. 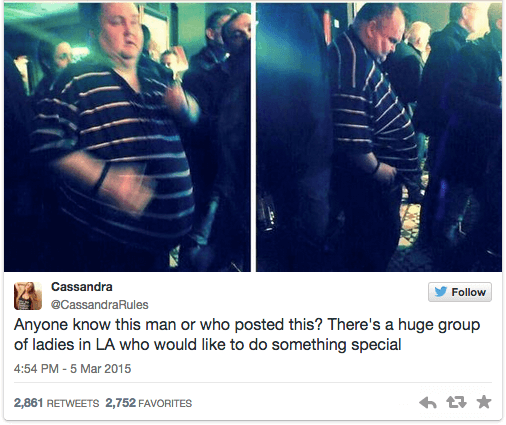 “I decided to tweet it and our offer in the hopes if he did see it, he would see something positive instead of a bunch of people upset,” Cassandra Fairbanks, aka @CassandraRules told Buzzfeed.

The invitation that they offered him? Restores my faith in the good that is in the world. 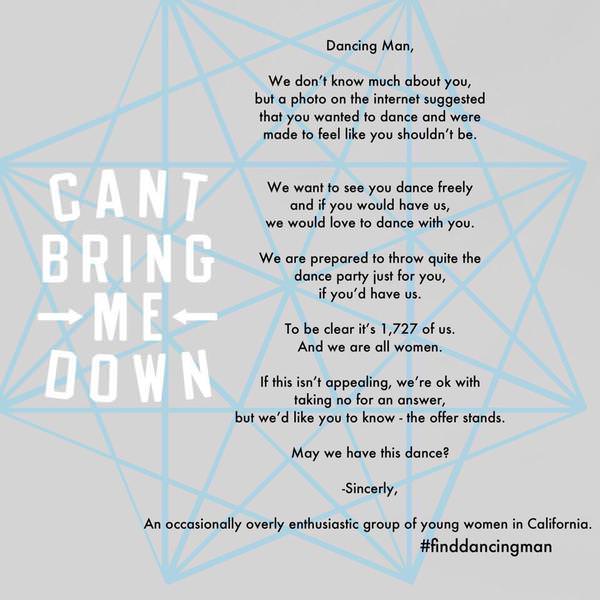 Over time, he was found – his name is Sean, and is now on Twitter as well, as @DancingManFound.

A GoFundMe page was set up to bring him to Los Angeles for the dance party, but the even better part? All the stories that have come out about bullying, and the fact that all of the extra money will be donated to anti-bullying charities in the United States and the United Kingdom.

It Doesn’t Stop There Though

As happy as all of that makes me, looking at the photos that kicked off this chain of events this past week has me thinking.

Great that thousands are coming together to throw a party for one man.

What about the bigger picture though? We, as a society, are still pretty messed up. One dance party doesn’t stop that.

There are still websites like People of WalMart out there. “What Not to Wear” features in magazines. If you look at the movies, the fat friend is almost always the “buddy” and never the star. And if we are really honest with ourselves, while we might not have taken the photos and posted them on the internet? We still might have cast a sideways glance at a stranger dancing at a club and wondered what they were thinking.

What right do they have to be dancing? To be wearing that outfit? To be behaving that way?

Let me be clear – I am not innocent here. Oh no, not at all. I really wish I could say that I didn’t do it, but I am standing here, guilty. I’ve asked a friend, “what were they thinking?” about how someone looks. I’m ashamed to admit that I’ve done it within the past month.

I hate myself for it every time I catch myself doing it. It goes against everything I stand for, and yet I feel like it is such a common part of our culture, we have become conditioned to do it without a second thought.

What if we changed that? Whenever I think something negative about a stranger, to break the cycle, I plan to walk up and compliment them. Find something good to say, and actually say it.

This is going to be my challenge for myself, because I truly believe there is something beautiful in everyone. We just have to stop and look for it. Stop being so critical of one another. You do not know their story, or what they are going through.

What we do have is the opportunity to make their day brighter, to say something positive, and to bring some joy in to their world.

Will you join me on this? Lets see if we can do something that makes an impact that goes far beyond a dance party?

I know it is a crazy idea. It will push me out of my comfort zone. I am pretty sure that is a good thing. Whatever it takes to break this horrible behavior.

Let me know what you think in the comments, and if you would be so kind? Please SHARE this. Use the buttons below, Pin this image to Pinterest, whatever works for you. Just help spread the word. XOXOXOXO 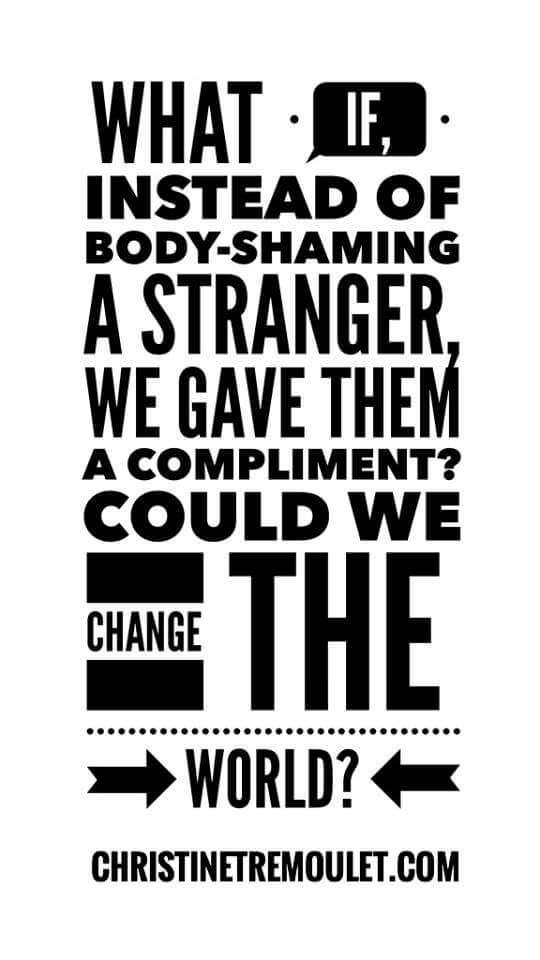 72 replies on “Breaking the Body-Shaming Habit”

Awesome! But I gotta say…I fully stand by the concept of peopleofwalmart.com

Aaron Tharpe but how would you feel if you found yourself on there?

A lot of people in mental health believe many of the people of Walmart are likely mentally ill.

The point isn’t People of Walmart though … But rather what can we do to truly make a change?

Angela LaMonte Onlyonceimages good came of it, but it left me pondering what bigger changes we could all make?

I am glad that good came out of it. And I am glad the culture of body shame is shifting. Despite being overweight I have a strong sense of self, high self esteem and so I feel intact and whole and loved etc etc but the judgement can be crushing to some people.
Thanks for sharing~

I don’t remember bodyshaming anyone in my mind, but I admit that I have wondered “why the hell would someone wear THAT”. I will join you in your mission and I will try to compliment the person whenever I say that to myself!

How sad that someone can be so empty that the only thing they can do to find enjoyment is to make fun of someone else. That’s terrible!

I think Walmart is exactly part of the issue….. Shaming the mentally ill isn’t “better” than body shaming…..

“What if we changed that? Whenever I think something negative about a stranger, to break the cycle and walk up and compliment them. Find something good to say, and actually say it.”

Carlos Benjamin I completely agree – no shaming is good. I just didn’t want to wander off in to a People of Walmart debate.

Lacy Dagerath, you *are* striking. I also have to remind myself sometimes that in some cultures, staring isn’t considered a rude thing. That was always so strange to me when I lived in Germany!

It’s all connected…. As a form of bullying, shaming begets shaming…..

People of Walmart was all fun and games until I saw someone I love on there. I am ashamed for ever looking at that terrible, mean spirited site.

This crushed me. I absolutely abhor that anyone is made to feel like less than they truly are. Happiness is beautiful, no matter what size or shape or gender.

@becky so sad… Sow times it seems okay when it’s far removed… But when it’s too close to home it’s painful. There are some people who wear ridiculous things to draw attention whether good or bad… And there are some people on there who may just not know what looks good.. Or what is right.. Or it may be all they can afford… In that case it saddens me

I just realized I typed pull instead of pool ha! My brain was tired.

the photos crushed me as well. crushed every time i see them. how can the person taking the photo not feel his shame and feel terrible themselves. i hate when i see happiness get interrupted by insecure mean people.

Christine I love where you are taking this! I’m in!

Oh wow, that 2nd photo makes me so sad. So cool to see a bunch of strangers come together for him though!

dude, i’m looking more into this. You didn’t mention that The LA Colliseum donated their venue and Moby offered to DJ for free!

It’s crazy how ass backwards people can be. When I see someone like this, I enjoy the thought of them doing what they want, despite what people may think. I only wish I could be as brave.

Christine I’m just saying…if I ever go into public wearing a leopard speedo, cape and mullet, while dragging my daughter on a leash…you have my permission to document and share 🙂

Adam Nyholt, I had no idea! I had not seen those updates! CRAZY!

Aaron Tharpe Ok, but first I’ll make a point to compliment you on something. Probably the leopard speedo, because leopard print is the BEST.

I logged into Twitter for the first time in ages just to follow him. This warms my heart, and makes me think. Thank you for sharing! I’m accepting your challenge. ♡

Mandie Haberman small steps – that is how we all change the world!

It is pretty awesome how so many are jumping on board. Shows that we as a culture at large are ready to send a message against bullying and trolling. This guy, by luck, gets to be the poster boy for it

RT @christinebpc: Body-shaming is something we all need to stop doing. My proposal to make the change. #DancingManFound #bodypos http://t.c…

Thanks for this post. Makes me sad. It’s an important issue.