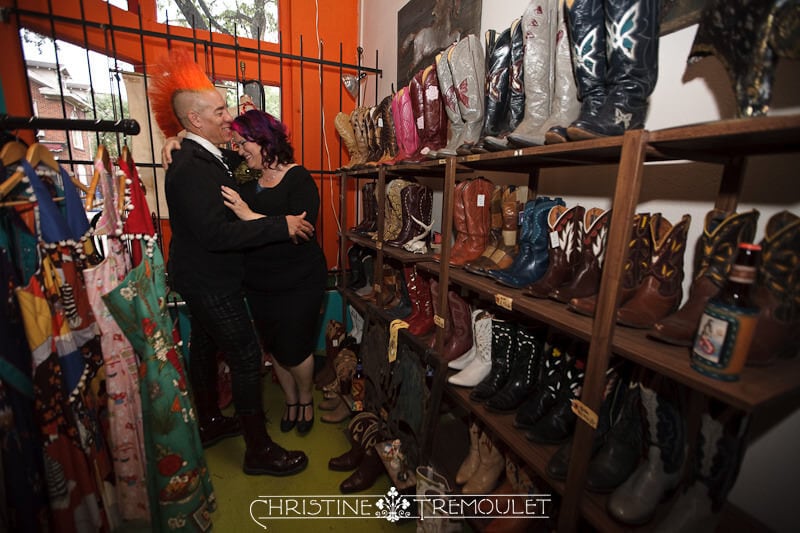 Sometime last year, while attending a luncheon for wedding vendors, I first discovered the Wish Upon a Wedding organization. You can read more about them here, but the premise is that as a Wish Granter, members of the wedding industry will come together and provide a wedding or vow renewal, free of cost, to couples facing terminal illness or life-altering circumstances. At that time, the Houston chapter didn’t even exist, but I still signed up right then through my iPhone. I’m a big believer in giving of your talents whenever you can, as I think that is just so important to the greater good.

Earlier this year, I was asked if I would step up and photography Alexis & Christian’s wedding, and I am so thrilled to have the opportunity to do that for them 45 days from now. (Eeeee!!!) I honestly could not ask for a better couple to be working with, and while it was the charity that brought us all together, I am giddy beyond words to now be able to call them friends as well. 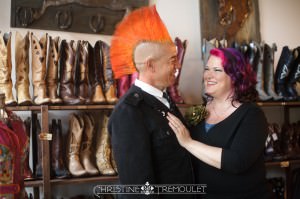 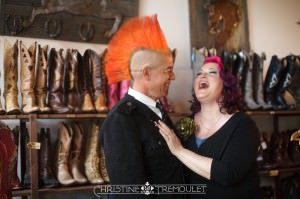 Just to get the hard part out of the way, because as I told Alexis last week when we had dinner — this shouldn’t be the focus of their love story, but it is essential to our story here — Alexis has cancer. She has mesothelioma, which was discovered somewhat randomly by an observant doctor while she was having gallbladder surgery. Due to the fact that it presented on her diaphragm, she has been set at being a Stage 4 cancer patient. Her case is extremely unusual, as the mesothelioma isn’t present in some of the “usual” starting spots. Normally by the time it is seen on the diaphragm, it is so far advanced that survival past two years is rare. Alexis just celebrated that two year anniversary this summer. And while she lights up the room like no one else when she walks in, it hasn’t all been easy obviously between surgery, chemo, and all the things that come with cancer. Her hope is that the discoveries that they are making with her treatment will help other cancer patients in the future because she is in unchartered waters. In her case, there is no cure. 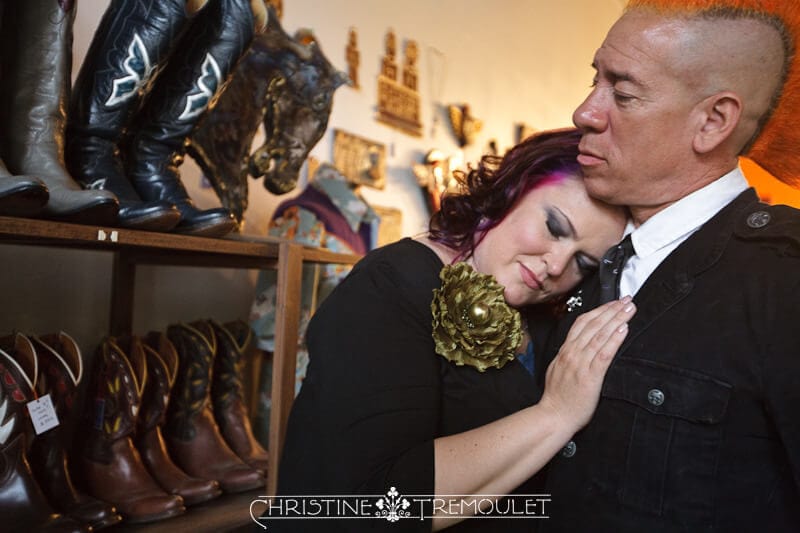 You would never guess it by the way she smiles. I suspect that having a man as wonderful as Christian by your side helps, because I can tell while visiting with them over dinner that he does everything he possibly can to lighten the burden for her and help her carry the weight of it all. 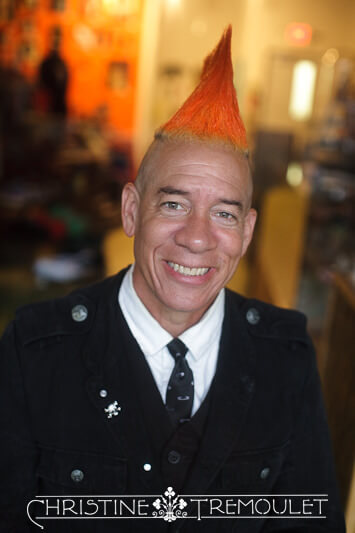 Speaking of Christian, he is a Houston icon in his own right. He leads The Hates which he formed over 30 years ago, and has been called “Houston’s first and last punk band”. He is a true Punk — with a heart of gold. He is so well known around this city, I’ve never been anywhere with him that someone hasn’t stopped him to tell him how they love his music or that they have seen him around town on his scooter with his mohawk. Matter of fact, I did the same thing – I used to see him all the time when I worked in downtown at Fulbright & Jaworski, and I couldn’t help but tell him that right after meeting him! Ahh… he draws people in. He & Alexis are such an amazing match. 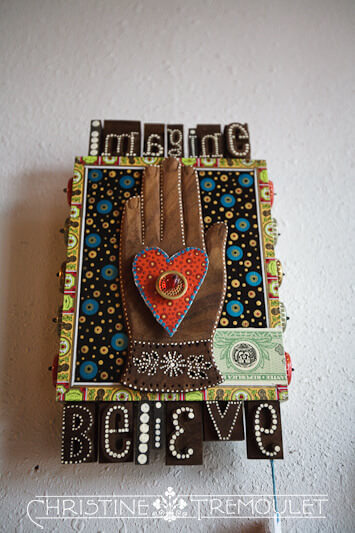 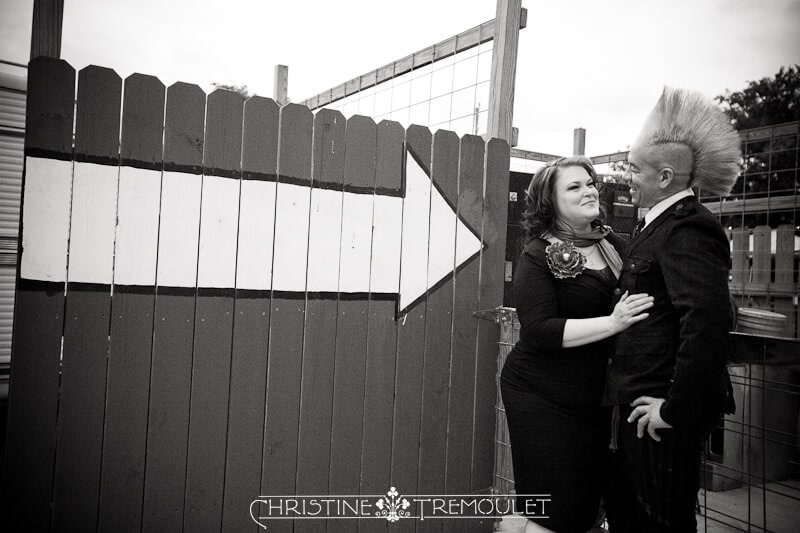 Sometimes things happen during a session that I would never expect, and I just watch them unfold. Like thumb wrestling. I couldn’t help but laugh that they were thumb wrestling! She won! She won! 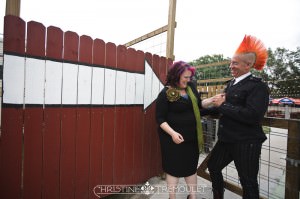 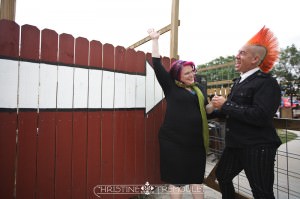 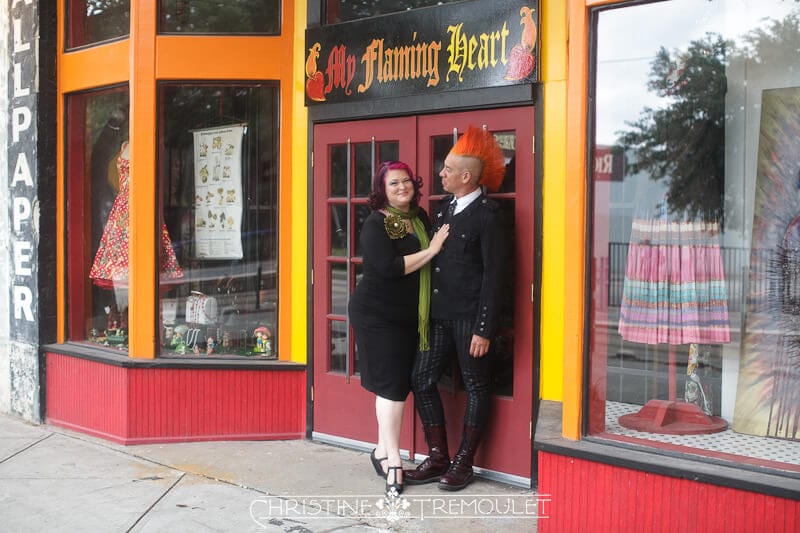 We started off our by meeting up at my studio, but when I learned through their session planning information the role that the Continental Club played on their relationship I suggested we go there for our session. It was perfect! We also stopped into their friend’s shop, My Flaming Heart. (That would be where the boots & the cool dresses are at. If you’re in the neighborhood, definitely check it out!) 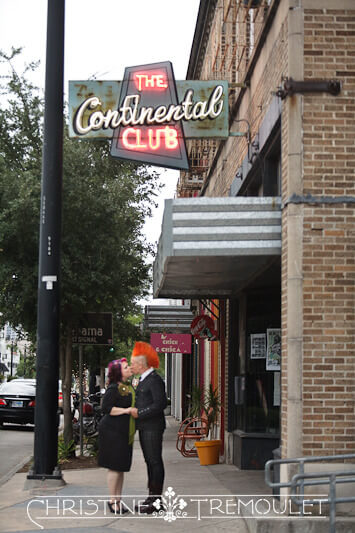 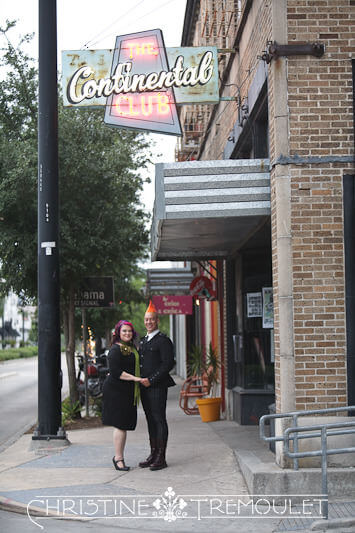 Alexis & Christian met in 2005 at an art show opening at Poison Girl. Alexis has a tattoo artist friend who was showing some of his paintings, & Christian had an acquaintance who was showing some of her work as well. One of Alexis’s girlfriends knew Christian & had actually tried to get him to come to their weekly dinners/get-togethers for a long while, but to no avail. She basically shoved Alexis in his direction & told her to talk about her new scooter. They talked a bit, but it was getting too crowded & too hot in there, so the girls took off for Catbird’s. Alexis invited him, but the friend he was with that night did not want to go. About two weeks later, the girls were at a show at the Continental Club… and there he was. Alexis & Christian ended up talking in the back bar through the entire show. That night she gave him her number with the understanding they would get together to have Indian food… the irony is that their first date was at a Chinese restaurant. 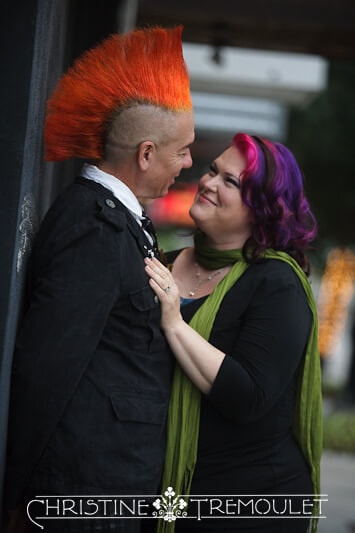 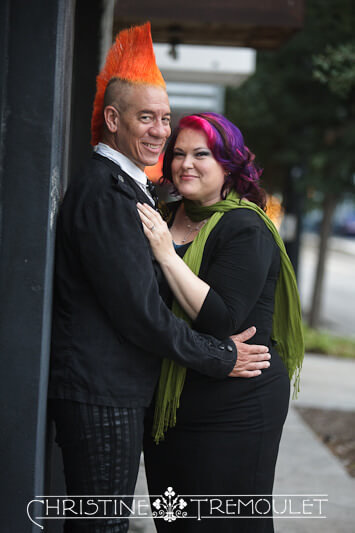 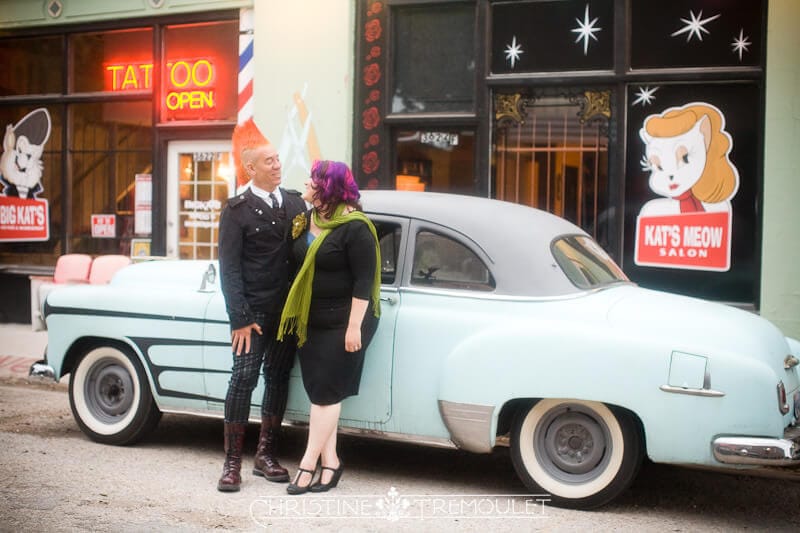 They like Scooter riding all over town. Alexis said, “Part of it is the wind in our faces, smelling cut grass & feeling the sun on our skin. Part of it is him telling me all kinds of things about the places we pass by -(he used to work for the City, so he knows quite a bit)-. Part of it is stopping at stoplights & stealing smooches.” 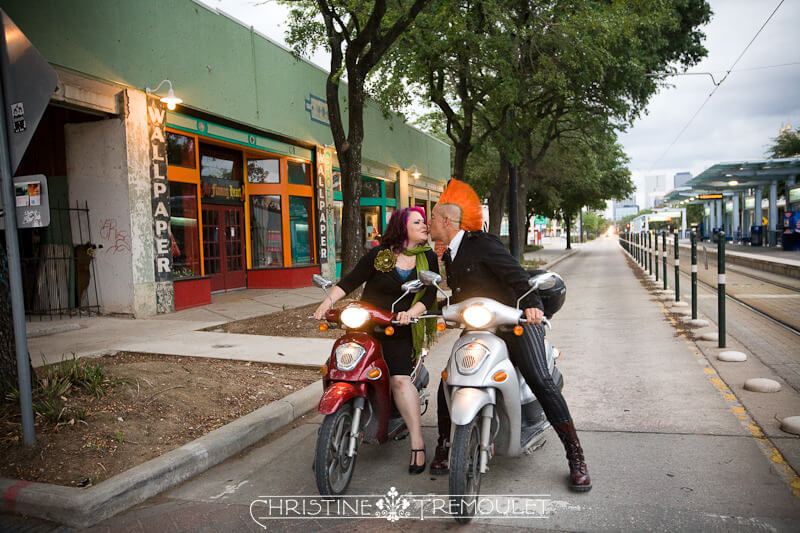 I wasn’t quite sure what she meant about that last part, but then I witnessed it while driving behind them. Every time we were stuck at a red light, they would steal kisses! This is why we need more people in Houston riding Scooters & Bicycles. If seeing that doesn’t make your day better, I don’t know what will. Seriously, sweetest thing ever! 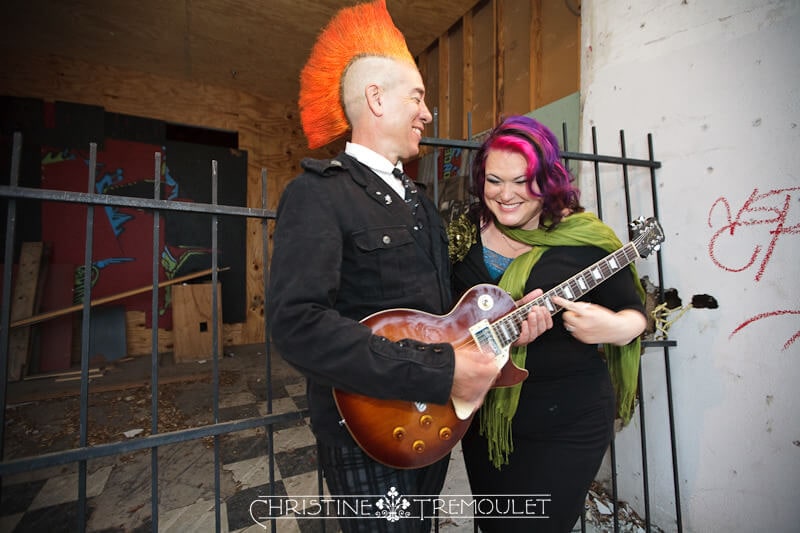 We wrapped up the night with Christian playing his guitar. Alexis helped … well, sort of. My favorite moment though was spotting how their fingers were intertwined at the end. So gentle, yet always touching. I can see how much of a touchstone Christian is for Alexis – and vice versa. That sums it all up right there. Love is an amazing thing. 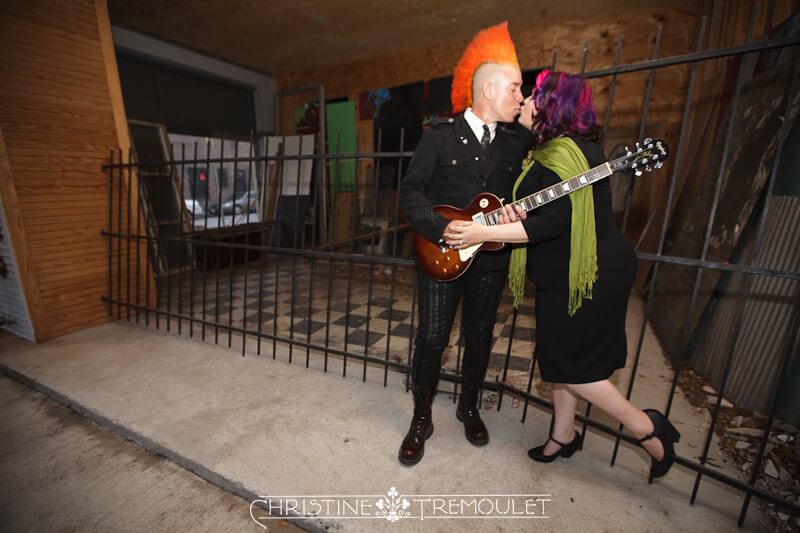 If you know someone who deserves to be helped by this fabulous organization, please tell them about Wish Upon a Wedding! If you are a wedding vendor and would like to help out, you can complete the Wish Granter application. If you aren’t already a Wish Granter, please consider becoming one today!

what a beautiful love story of two beautiful people!

Love this!! When I saw the pic I was like hey I know that dude. More like his Mohawk, which if I remember is usually pink. They look so happy! Congrats to the coolest looking couple ever! 🙂

Wow, this couple rocks literally and figuratively. Just a beautiful love story and it lifts my soul. Your photos of them are amazing and so fun! You’re a good woman for getting involved in Wish Upon a Wedding… thanks for sharing this story.

Wow, they are a gorgeous couple. I’m totally jealous of her hair!!

I know, right Heather? I love it too. I’m going to figure out how to do pink & purple extensions for their wedding. I figured that would be super fun!

These kids are so awesome! I can’t wait for their wedding 🙂

I’m so excited to be catering their wedding!!!

Your work is awesome. I love the shot of the couple on separate motor cycles while kissing.

Great shots! Her hair is amaaaazing!!

Isn’t this the greatest couple ever. They are so fabulous and genuine. I wish them all the best now and always.

[…] What an amazing day it was — and I am so grateful that Wish Upon a Wedding brought us all together, because they are some of the most wonderful people I’ve ever met. You may have seen them riding around town on their scooters, kissing whenever they come to a stop light. Cutest thing EVER! (You can see more of their engagement session here.) […]

What a great street/backdrop for this particular couple. 🙂